© 2014 IntroInto.com.au
Home Lighting: How the Right Choice Can Transform the Space
Intro into Swim Spas: How to Get the Most for Your Money

You don’t need to own the biggest, most powerful, and loudest gas-guzzling saw to perform some major heavy-duty work around the yard or in your workshop. In fact, more and more construction workers and homeowners are slowly shifting to more portable equipment, making portable battery saw models the more efficient choice for a wide range of tasks.

If you’re interested in buying a cordless electric saw, but aren’t sure what to look for, but want to learn about what makes them unique and what benefits they offer in terms of functionality, keep reading. I’ll talk about all of this and more, which will hopefully convince you that battery saws are the best-suited types of saws for your DIY, home improvement, or professional project.

Battery saws, unlike electric or gas saws, are completely cordless, making them much more portable. If you need to reach difficult heights or cut your way through crannies and nooks, a battery saw is the best solution.

Most battery-powered saws use rechargeable batteries of different functions and capabilities. These batteries will usually last for hundreds of recharge cycles before they need to be replaced, making them longer-lasting than gas-powered saws.

Additionally, battery-powered saws are easier to understand and turn on, with a simple push-to-turn-on mechanism installed right onto them. The batteries can easily be taken out and recharged before being placed back into the saw again. You can also get an extra battery pack for longer use and swap between the two battery packs.

These saws are becoming a hot trend for professionals and homeowners due to their ability to outlast their conventional counterparts. Not only do they last longer thanks to rechargeable lithium batteries, but they’re also the most energy-efficient option. Some of their benefits include being more portable and compact since they don’t need a cord that limits or restricts your movements and distance requirements. This allows you to carry them anywhere you need them.

Additionally, they don’t emit any gas fumes or smoke, which makes them eco-friendly too. In fact, they’re one of the most environmentally-friendly tools. And since they only need a battery for use, they don’t take up too much electrical energy. Gas saws can be dangerous when used for prolonged periods of time since the user will be breathing in harmful fumes. This also means that gas saws can’t be used in poorly ventilated areas.

Furthermore, battery-powered saws don’t get damaged or go dull easily. When you leave another type of saw out for too long, it might not start up without taking several attempts. Plus, their blades can get dull or become rusted, which is something that doesn’t happen with battery-powered models, as the battery preserves all the power when the saw is not in use.

Battery-powered saws are also efficient and quiet, which can be a nice benefit if you’re working around your backyard and you don’t want to disturb the neighbours. You won’t have to rev it up as you would with a gas model, simply because you won’t use fuel energy and the carburettor uses a different type of energy to power the motor.

Lastly, battery-powered saw models don’t fluctuate in speed, unlike gas-powered models that sometimes have their blade rotating and bursting at various speeds. They offer a pretty consistent performance, which makes them safer to use as they’re more predictable. 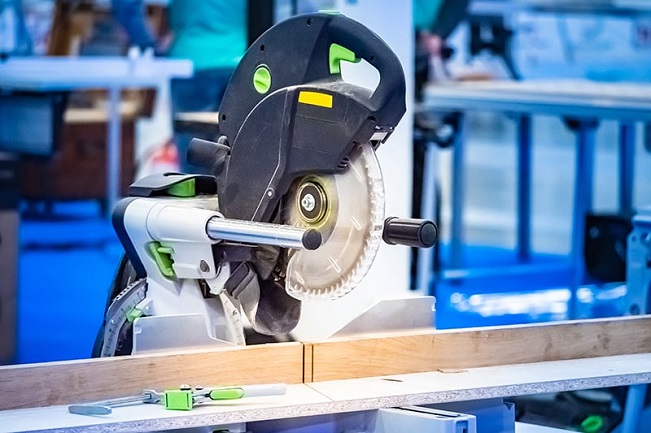 Generally, homeowners and workers who are looking to perform a variety of jobs will find that battery-powered saws are the ideal type. Those who are just starting out with using a saw, or aren’t quite sure about how to use them to their full extent can benefit from this type of saws as well.

These saws check out for versatility and control rather well. They’re usually smaller than the other types, but they’re also one of the most usable and flexible saws available on today’s market. Battery-powered saws are a great choice for light- to medium-duty tasks that need to be performed around the house, yard or small construction projects.